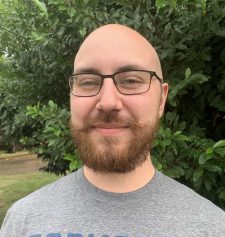 From A&S Desktop News | Casey Cartwright, a PhD candidate in physics at UA, was selected as one of 52 national awardees of the Department of Energy’s Office of Science Graduate Student Research program. This program allows graduate students in science, math, engineering, and technology to conduct research in one of the DOE laboratories. Here, students have the opportunity to use state-of-the-art resources and collaborate with esteemed scientists to further their knowledge in their field.

Cartwright, whose research revolves around high energy physics, will work with Dr. Björn Schenke, who studies nuclear and high energy physics at the Brookhaven National Lab in Upton, New York. The pair will study quantum field theory, looking specifically at what happens the moment that heavy ions collide. In order to do this, Cartwright will create a model of the early time behavior of quark gluon plasma by constructing a map between our four-dimensional space and a larger five-dimensional theory of gravity, a concept known as holography.

“By studying the gravitational dynamics of five dimensional objects, I plan to utilize the holographic principle to extract information about the early evolution of a model of the quark gluon plasma in strong magnetic fields,” Cartwright said. “With my advisor at Brookhaven National Lab, we plan on taking data I generate and translating it into predictions on the behavior of the real quark gluon plasma, which can be compared with experimental data.”

Cartwright hopes that, by studying these problems, he’ll be able to contribute to a question that has long been unanswered by the nuclear physics community. He’s also excited to be working on applicable research, as most of his research thus far has been theoretical.

“The discussions with the scientists I’ll be collaborating with will really help me learn a lot more about the real world, rather than the theoretical world that I typically live in,” Cartwright said. “A lot of the stuff that I do is highly theoretical.  It’ll be nice to be able to discuss and talk to people who are connected with real-world experiments so I can gain some more insight about the real-world circumstances of these collisions that are actually happening. And hopefully, that’ll help determine further research directions and inform the way that I think about these systems going forward.”